Why choose our school?

Fr John Therry’s new facilities and contemporary classrooms allow students to strive for excellence and our strong Performing Arts programs ensure a holistic education. Our outstanding teaching staff regularly undertake professional development and work with parents to provide partnerships that successfully link home with school. Finally, a rich history grounds students in the principles of faith, justice and trust so they can succeed in tomorrow’s world.

As principal of Fr John Therry Catholic Primary School, I am dedicated to providing a holistic education for every student to reach their full potential across all domains including, academic, social, emotional, spiritual and physical.

Staff professional development is an absolute priority, as our teachers strive to become absolute experts who fully respect each child in our care. Our staff are critical thinkers who continually adapt their practice based on the latest educational research and on their own observations and assessments of student learning.

As principal, I regularly visit classrooms to monitor teaching and learning and, with my leadership team, to be able to set directions for continual improvement.

Our vision for learning is to ‘Empower Every Student’ through providing a teaching and learning framework that is relational, diverse, contemporary and adaptive.

Our school ethos is based on the principles of Faith, Justice and Trust with students, staff and parents working together in partnership as we work, learn and pray.

Feel free to contact the school and ask to speak to me or to arrange a school tour with our student leaders who will be happy to show you around and answer any questions from their perspective. 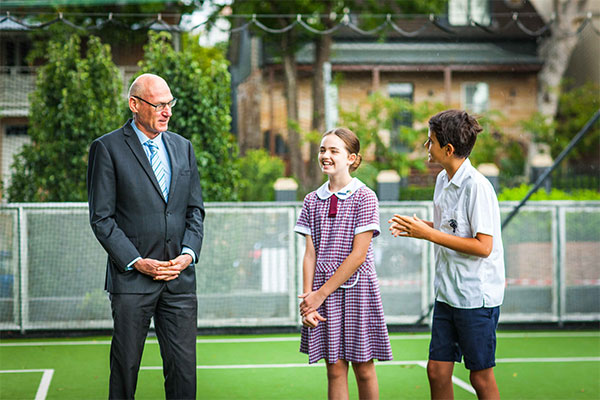 Our History and Charism

History
Fr John Therry Catholic Primary School was founded in 1995 with 92 students after the amalgamation of St Augustine’s, Balmain and St Joseph’s, Rozelle. The school was named in honour of the founder of Catholic Education in Australia, Fr John Therry, who was parish priest in Balmain until he died in 1864.

Fr John Therry Catholic Primary School is located on two campuses side by side with Administration, Kindergarten and Y5 and Y6 on the Eaton Street campus and Y1–4 and a new resource centre on the Jane Street campus. A major building project was recently completed to upgrade the Eaton Street campus, providing modern, contemporary spaces for staff and students.

Charism
John Joseph Therry was born in Cork, Ireland in 1790 and ordained a priest in 1815. Recommended by his own bishop as a capable, zealous and “valuable young man” Therry sailed from Cork under a senior priest, Father Philip Conolly, in the Janus, which carried more than a hundred prisoners. They arrived in Sydney, in May 1820, authorised by both church and state.

Therry described his life in Australia over the next forty-four years as “one of incessant labour very often accompanied by painful anxiety.” As a popular, energetic and restless man, Therry attended to every aspect of the moral and religious life of Catholic settlers and convicts.

After decades of chaplaincy, he was appointed as Archpriest in 1850. In May 1856, Father Therry returned to Sydney, and remained in Balmain the rest of his life. He died in 1864 and is buried in the crypt of St Mary’s Cathedral.

Our Mission and Values

Our mission is to:

What do we believe at Fr John Therry?

We believe in faith, justice and trust.

How do we achieve this?

Fr John Therry Catholic Primary School Balmain/Rozelle includes the wider community in its day-to-day activities. The link between the school and parishes of St Augustine’s Balmain and St Joseph’s Rozelle is extremely strong. Our families are keen to give back to the community and work in partnership with the school to support a variety of charities.

We regularly invite families to come together to celebrate Sunday mass within the parish and at Balmain and Rozelle. We provide for families who don’t attend mass regularly, or are not part of this parish, to connect them with the wider parish community.

Proudly Part of the Community of Sydney Catholic Schools

Our school is part of a system of over 150 low-fee Catholic schools in the Sydney Archdiocese.

Sydney Catholic Schools are thriving Catholic communities that ignite a love of Christ through excellent teaching and learning to empower students to reach their full potential.

We acknowledge the traditional custodians of the land on which our schools and offices now stand. We pay our respects to Elders past and present.